Revealed: Is this Chelsea flop really the worst Premier League striker of all time… 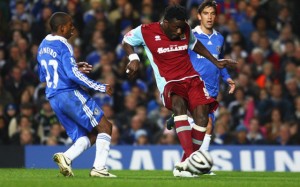 The Hackney-born striker failed to score in 15 Premier League appearances for Norwich City between 1993 and 1994, but a reasonable record in the lower divisions encouraged Leicester City to spend a club record £5.5m to bring him from Wolverhampton Wanderers in 2000. Just 11 goals in 58 Premier League games saw him transferred to Crystal Palace in 2002.