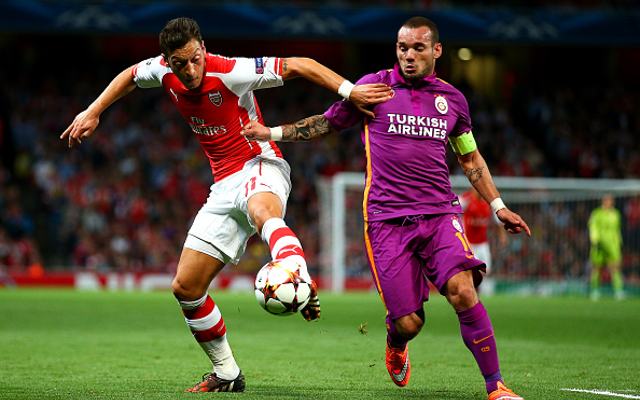 Chelsea and Manchester United could be ready to bid for Galatasaray playmaker Wesley Sneijder as he looks to be seeking an exit from the club this January, according to the Daily Express.

The Netherlands international has long been linked with a move to the Premier League after being regarded for many years as one of the best creative midfield players in the world, and has continued to emerge as a target for top clubs despite looking somewhat past his best in recent times.

Sneijder is seemingly no longer guaranteed a regular starting place for Galatasaray, leading to speculation that he would be ready to quit the club this winter.

This is said to have put United and Chelsea on alert this January as both clubs eye midfielders to strengthen their depth in that part of the pitch, with Louis van Gaal’s side arguably in more need of new arrivals in the middle of the park.

Still, Chelsea are also keen on the 30-year-old, with Jose Mourinho previously forming a successful partnership with the player during their time together at Inter Milan, famously winning the treble in the 2009/10 season, with Sneijder playing a key role in the team’s success.