Aaron Ramsey was the player who covered the most distance in Arsenal’s win against Dortmund last night, according to these stats from Sky. 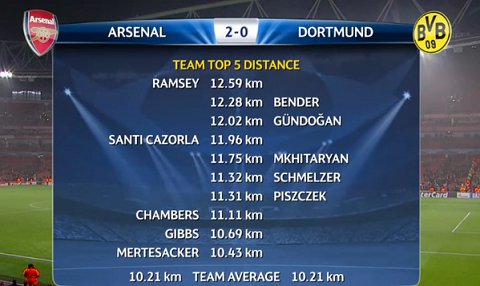 These numbers back up the midfielder’s claims in the wake of the Manchester United game at the weekend. The Welshman told the Daily Mail that “[the Man United game] was the first time in a long time that I felt sharp again and felt like I was physically there. Hopefully I can continue that.”

The former Cardiff City midfielder has had a slow start to the season, and received a lot of criticism from fans and pundits. If he has indeed been carrying an injury, and is now fully recovered, as these stats suggest, Arsenal fans can be very hopeful that his performances will continue to improve.

Santi Cazorla also had a good game, working hard up and down both flanks, dropping deep to collect the ball and playing dangerous passes into the box. All too often the Spaniard is squeezed out of games, but the 12km covered by the 29-year-old last night shows that he can be influential in big matches – he just needs to push himself to stay involved throughout.

For Dortmund, Ilkay Gundogan’s numbers are really impressive, considering the German midfielder has barely returned from a long-term injury, and still looked to be carrying some excess mass. He was the Black and Yellows’ stand-out player on the night.