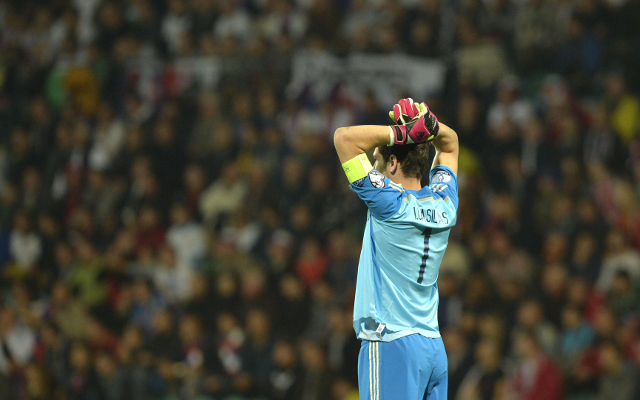 Iker Casillas on the move.

Real Madrid and Spain goalkeeper Iker Casillas is set to leave the Bernabeu after more than a decade of loyal service, with the Express reporting that the Spaniard will choose between Premier League rivals Arsenal and Liverpool in the January transfer window as Real look to allow the underperforming start to leave the Bernabeu.

The news will come as a blow to Manchester United, according to the report, with the Red Devils also having been interested in bringing Casillas as competition for first choice David de Gea – although they could now turn to Casillas’ long term understudy with La Roja, former Barcelona stopper Victor Valdes.

Both Arsenal and Liverpool have minor issues in the goalkeeping department, with neither Wojciech Szczesny or Simon Mignolet quite having lived up to the potential that they showed whilst younger, meaning that Arsene Wenger and Brendan Rodgers are both considering bringing in more experienced replacements in January.

Despite some moments of weakness, notably for Spain at the summer World Cup, Casillas has been one of the finest goalkeepers of his generation and would represent a real coup for either Premier League side if they are able to lure him to England once the window reopens.