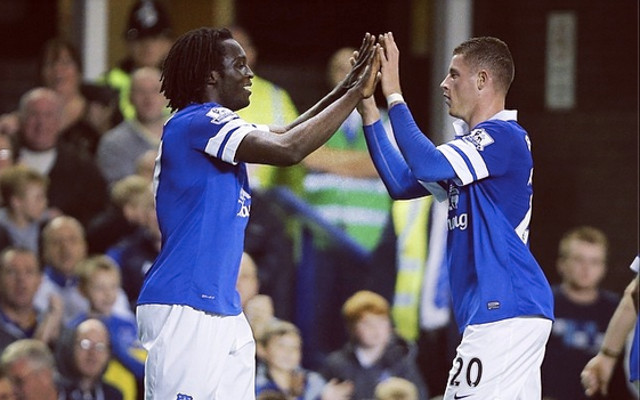 Goals from Lukaku and Mirallas enough to see Martinez’s men through.

Everton have sailed through to the knockout stages of the Europa League after securing top spot in the group on their return to continental competition after Roberto Martinez and his side came out on top after a thrilling game against Vfl Wolfsburg, currently second in the Bundesliga.

The visitors were penned back for long periods of the game against a side who had only failed to score once previously this season, but some heroic defending and goalkeeping from Tim Howard proved to be the platform that Everton needed to secure their most impressive result of the season to date.

They should’ve fallen behind midway through the first half, however, but an incorrect linesman’s flag saved them after Nicklas Bendtner’s flick was turned into the net.

The Toffees showed the initiative to seize on their slice of luck, however, taking the lead through one of many lightning quick counter attacks – Romelu Lukaku racing on to Kevin Mirallas’ flick after a Wolfsburg corner before calmly slotting the ball home to open the scoring:

Going in ahead at the break was clearly a huge boost for Martinez and his side and they kept up the same level of commitment and organisation in the second half, with Bendtner this time having a goal ruled out himself for offside, this time correctly.

Long shots from Kevin de Bruyne continued to rain in, but Everton kept their composure and secure it when the Belgian connection’s link up play was reversed from the first goal – Lukaku releasing Mirallas to finish brilliantly and secure the game:

Everton even had a goal ruled out themselves in the dying minutes, with substitute Ross Barkley inches offside after being freed by Christian Atsu, but they held on for a crucial win. In this kind of form and with a huge cherry being offered to the Europa League winners this season, are the Toffees genuine contenders for a European trophy?