Real Madrid say £64m will be enough to prise Isco away from the Bernabeu, prompting Arsenal and Liverpool to renew their interest in the 22-year-old midfielder, according to reports in the Daily Express.

CaughtOffside analyses the possible permutations of such a deal taking place, as well as how both the Gunners and the Reds could spend the money better: 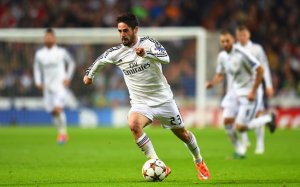 The Express believes that both Arsenal and Liverpool are in with a chance of landing Real Madrid star Isco after being informed that £64m will be enough to secure the Spaniard’s signature.

Such a fee would make the midfielder the fourth most expensive player of all time, behind only Cristiano Ronaldo, Gareth Bale and Luis Suarez – an extraordinary figure for a player still only on the fringe’s of the Madrid team.

The versatile midfielder is currently enjoying a fine run of form under Carlo Ancelotti, impressing in the absence of Bale, who recently spent a spell on the sidelines due to injury. His performances have attracted interest from PSG, as well as our Premier League duo.