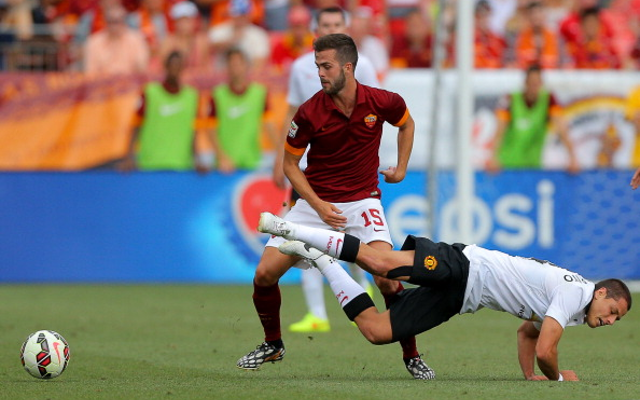 Manchester United and Manchester City look set for a battle in their bid to sign AS Roma playmaker Miralem Pjanic, according to Fichajes.net.

The Bosnian international has established himself as one of the best creative midfield players in Europe in recent times, shining as a star player for Roma and one of the best performers in Serie A in the last few years.

The 24-year-old is seemingly a favourite of United boss Louis van Gaal as he looks to add some quality to his midfield, though City and Paris Saint-Germain could also provide competition for his signature.

Still, it is thought that all of these clubs will have to look elsewhere to solve their midfield needs, with Pjanic recently signing a contract extension at the Stadio Olimpico, keeping him at the club until 2018.

The former Lyon star is happy with life at Roma and not looking for a move at the moment, despite so many exciting offers from some of Europe’s elite club sides.

It may be that United will instead bring in Pjanic’s Roma team-mate Kevin Strootman, another top class midfielder who has been linked as a top target for the Red Devils for some time.