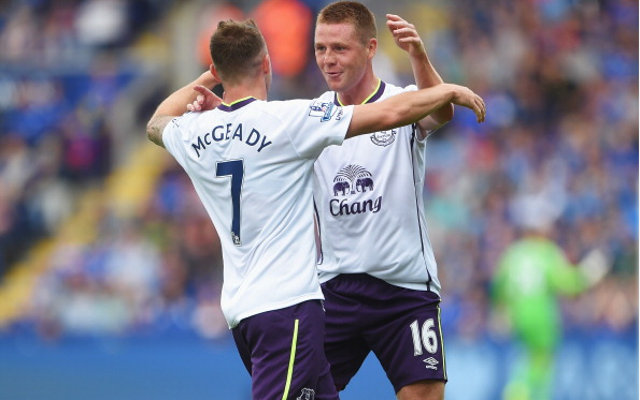 Everton will look to fend off Arsenal interest in midfielder James McCarthy by not only offering the Republic of Ireland international a new contract but also by placing a £20m price-tag on the Gunners target according to the Daily Mirror.

The Toffees are in ongoing talks with McCarthy over a new deal but will step-up those efforts amid increased transfer speculation.

The former Wigan Athletic man has formed a solid partnership with veteran Toffees man Gareth Barry but may well be ready for a fresh challenge.

The tough tackler has the physical attributes to provide Arsenal with some much needed steel and is also comfortable on the ball and a good distributor of the ball to boot.

Wenger may well be keen to make such a move in January as he seeks to secure, at the very least, a top four finish this term as he comes under increasing pressure following a lengthy period without landing significant silverware.

Arsenal did end a nine year wait for a trophy when they defeated Hull City in the FA Cup final last May but the club’s fans expect their side to be mounting genuine challenges for Premier and Champions League crowns and further investment is needed in the club’s squad in order to make those hopes a reality.