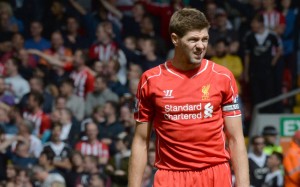 Liverpool have formally offered their captain a new contract, while Steven Gerrard has himself declared that there is no rift between him and the club, following rumours of a bust-up with manager Brendan Rodgers.

Reports in the Daily Mirror confirm that the Reds are eager to keep the midfielder beyond the end of this season, despite dropping him to the bench for Saturday’s 1-0 win over Stoke City.

Gerrard responded by posting a message of support on Instagram, saying: “Just to set the record straight, talk of a fall-out between us two is nonsense,” he wrote on his Instagram account, and followed it with #together #solid #ynwa.”