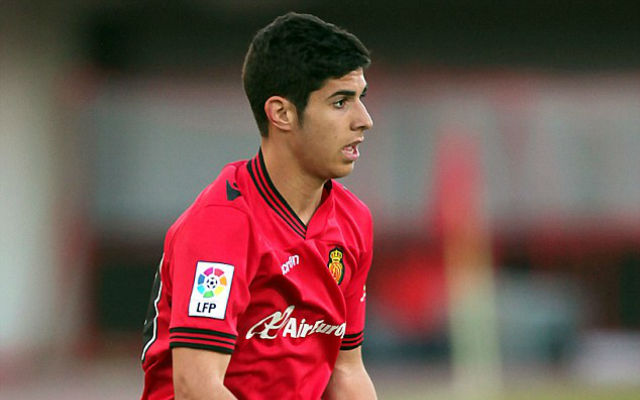 Real Madrid have beaten arch rivals Barcelona to the signature of Real Mallorca’s teenage winger Marco Asensio on a five-year deal, according to Goal.com.

READ MORE:
The European Super League Table: Chelsea 5th, But Where Are Arsenal And Man United!?!.
Manchester United Centre Back Chase Hots Up As Six Man Shortlist Is Drawn Up.
Manchester United Predicted Lineup vs Stoke City: Still No Room For Falcao & Di Maria To Miss Out.

The 18-year-old winger is expected to finalise a €3.7 million transfer to the Santiago Bernabeu when the January transfer window re-opens for business next month.

And he confirmed the deal himself by telling reporters; “We will see what happens this week because in this club anything can happen. Real Madrid have decided and I am really happy.

“I’m looking forward to seeing the finalisation of the deal in order to make everyone calmer – the club, me and Real Madrid.

“It is an honour that the best clubs are fixed on me, and Real Madrid are the best of the best. The agreement is for five seasons and now it’s for me to enjoy.”

He made his debut for Mallorca last season as a 17-year-old, but couldn’t halt their slide down to the Segunda division but has since played 33 games, scoring three goals in the process.