Man City star is in the form of his life.

Manchester City striker Sergio Aguero has been on fire this season, bagging himself 14 goals as the defending champions look to keep the pace with Chelsea. But how in form is he? Surely he hasn’t scored more, or as many goals as seven other Premier League sides?

Indeed he has. The Argentine international has outscored the likes of Aston Villa, Burnley and Sunderland, whilst scoring as many as West Brom, Stoke, QPR and Leicester.

As the season progresses he will undoubtedly overtake the majority of those clubs as they languish near the bottom, whilst Aguero and City thrive. 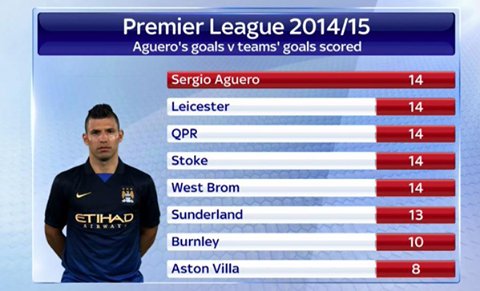