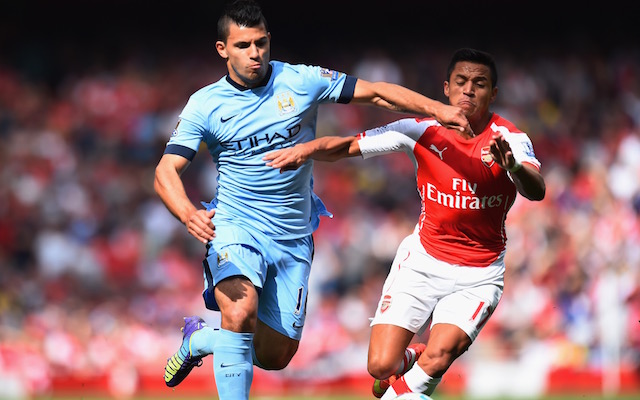 Both sides rely heavily on an individual star.

Many sides have been accused of being one-man teams in the past and in the Premier League this season it is the turn of Arsenal and Manchester City.

Both clubs have South Americans who have been doing the majority of their scoring and this reliance on one single star is worrying for fans of both the Gunners and City.

At the Emirates Stadium the £35m purchase of Alexis Sanchez from FC Barcelona over the summer is looking like a shrewd investment by Arsene Wenger, with the 25-year-old adapting much better to English football than fellow expensive signing Mesut Ozil.

Sanchez has already netted an impressive 14 goals in 23 matches in all competitions, despite the fact the Chile international rarely plays as striker and often operates out wide.

With Olivier Giroud and Ozil both injured for much of the campaign this has been vital for the North Londoners and the attacker has earned some very vital points for Wenger’s team as they continue to struggle.

However, the Frenchman has pointed out that Sanchez could suffer burnout and if the forward were to miss a lengthy spell for the team it could be even more disastrous in terms of their results.

Yet despite the focus being mainly on the Emirates when talking of one man teams, it is actually more of a crisis at the Etihad Stadium and they are having to deal with their own problems already.

Sergio Aguero has scored 19 times in his 21 games so far in 2014/15, but was forced off on Saturday after less than two minutes as his side went onto narrowly beat Everton 1-0.

With Aguero on the pitch that scoreline could have been a lot healthier for Manuel Pellegrini’s side, but with the Argentine suffering an injury to the ligaments in his knee it was left to Yaya Toure to score a penalty to earn the three points.

The Citizens face AS Roma on Wednesday in a must-win Champions League clash, but without their talismanic 26-year-old – who netted a hat-trick last time out in the competition against Bayern Munich – the task looks a whole lot more tricky.

Despite Pellegrini having a squad brimming with talent, without Aguero it’s difficult to tell where exactly the goals are going to come from.

This is likely to undo the reigning champions’ defence of their title as well, with Chelsea looking like a much more rounded side in the race to lift the trophy in May – despite losing to Newcastle United on Saturday.

More has been made of the Gunners’ reliance on Sanchez, but in our mind City lean on Aguero far more that the North London outfit do on their own South American ace.