How will the Chelsea boss adapt his side without Cesc? Here are three possibilities.

Chelsea face a real test against Hull City on Saturday with Cesc Fabregas suspended, and José Mourinho will need to decide how to reshuffle his side to accommodate the absence of his creative midfielder.

SEE MORE:
Chelsea Boss Jose Mourinho Rules Out Sale Of Promising Youngster
Embarrassment For £50m Chelsea Star As Mourinho Tells Him Not To Come Back After Loan
Arsenal Are Bookies Favourites To Land La Liga Duo & PSG Star In January

Option 1: Eden Hazard in the hole, Oscar alongside Nemanja Matic 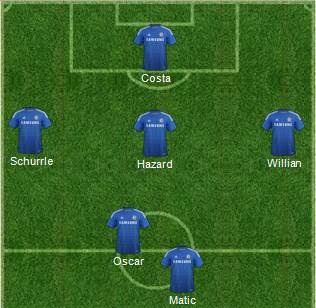 Advantages: This system allows André Schurrle to come into the side. The German scored against Sporting in midweek, and is pressing for another opportunity in the first team. It also allows Hazard to try his luck in the centre, where he can roam and around and find space between the lines, and will be in better shooting positions.

Disadvantages: Hazard has been extremely effective playing from the left, and Chelea risk disrupting that by moving him inside. Oscar has also done well behind the strikers, and playing him deeper, out of position might not work.