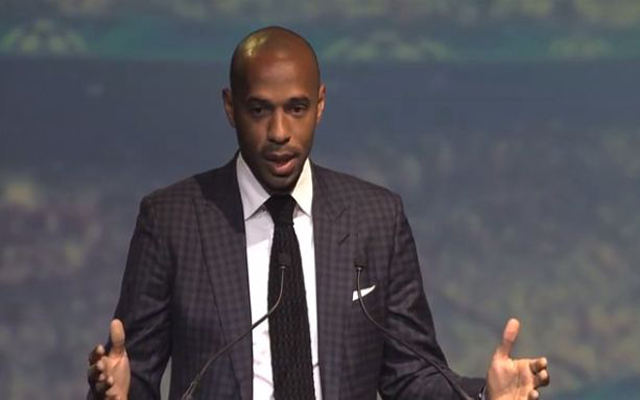 Arsenal legend Thierry Henry has admitted that he dreams of managing the Gunners one day.

The club’s all-time record goalscorer, who had been in America with New York Red Bulls, retired from playing this week.

He will now return to England to work as a pundit on Sky Sports.

Alongside his media work, the 37-year-old will study for his coaching badges, something he hopes to do under the guidance of former boss Arsene Wenger.

Henry knows that he is a long way from being in the frame for a Premier League job, but he concedes that taking over from Wenger one day would excite him.

Asked if his ultimate ambition would be to manage the Gunners,  Henry told The Telegraph: “That would be a dream come true, but that’s not how it works.

“You have to prove yourself first, you have to learn first. You need to be able to understand what it is to be a manager.

“Can you teach, can you be patient? All these problems. People think they are all managers in their own way, but it’s not that easy.

“The plan is to start my badges and I guess Arsenal will help me. To pass your badges, you have to work closely with a club and I would like to think it is going to be Arsenal. You know I’m in London when you see me at Arsenal.

“First and foremost I don’t know how or when, but everybody knows I would love to go back to Arsenal in some capacity.

“But I need to be equipped to go back. I want to learn the process, so I have to get my badges and what not. We will see what is going to happen.

“It’s not a secret, everybody talks about me going back to Arsenal and me the same thing, but it doesn’t always work like that. First and foremost, I have to make sure that I have everything on board to be able to go back.

“Hard work is all I know. It comes from my dad and the guys I played with when I arrived in the national team. Zidane, Djorkaeff, Thuram, Desailly, Petit, Barthez, that’s how they were and that’s what they taught me.

“So I took it on board because you can only be the reflection of your education. That’s the way I was educated, so that’s what I’m going to try to pass on.”