Everyone’s favourite Dane was back in the headlines this week after tweeting he would be “picking up a cutie at the airport” rather than watching his current side VfL Wolfsburg draw 2-2 away at Borussia Dortmund.

Even tho I will not face the yellow wall tonite, It will be a good nite. hope the boys will tear it up. Me?Picking up a cutie at the airport

Whether that meant he was innocently going to meet his son at the airport is unclear, but given Bendtner’s track record you wouldn’t bet on it.

However, this got CaughtOffside feeling all sentimental and nostalgic for the peak Bendtner era during his time at Arsenal and so we thought we’d look back at the strikers finest moments. 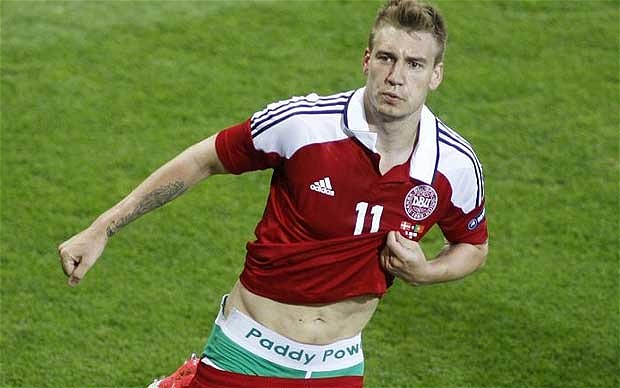 Bendtner was fined €100,000 for lowering his shorts to show branded ‘Paddy Power’ underwear, referencing the Irish betting compant, after he scored twice in Denmark’s defeat to Portugal at Euro 2012.

Bendtner said: “It is just a pair of lucky boxer shorts that I used in the first game as well and have used before the tournament.”