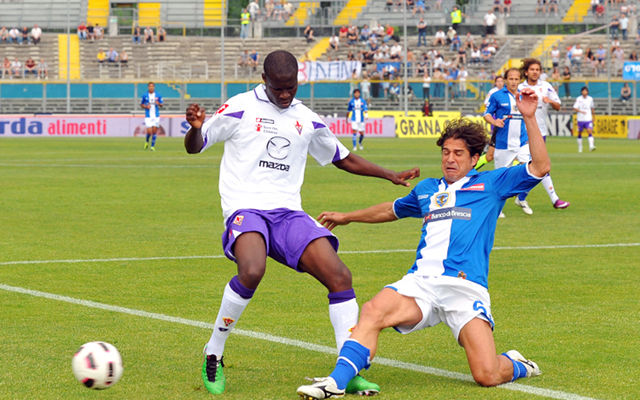 Premier League sides could move for Khouma Babacar from Fiorentina.

It appears to be common knowledge that Premier League underachievers Liverpool and Tottenham Hotspur are both interested in adding firepower to their squads in the January transfer window after a number of transfer links involving both clubs, but another contender has emerged, with Italian publication Calacio Mercato suggesting that they are set to fight it out for the signing of exciting young Fiorentina striker Khouma Babacar.

The 21 year-old Senegalese striker has used a successful loan spell with Modena in Serie B last season to launch his career at the Stadio Artemio Franchi and now has five Serie A goals to his name for La Viola, although it is his all-round game and raw power that is likely to have caught the eye of Premier League suitors.

Incredible hard-working and deceptively subtle on the ball, Babacar is one of a number of Serie A youngsters to rise to prominence this season despite a fairly underwhelming campaign from his team, but it is likely to take a significant bid from Spurs or Liverpool if they are to tempt Fiorentina into selling.

The Tottenham Hotspur link has an added intrigue with the fact that the two sides are set to meet in the last thirty two of the Europa League and, with Babacar already having featured in the group stages for La Viola, he would be ineligible for either English club in the competition if he did make the move.