Arsenal against Liverpool at Anfield is a fixture steeped in history.

Arsene Wenger and Brendan Rodgers are both under pressure to win on Sunday to get Liverpool and Arsenal back in the race for the top four and potentially the title.

Whenever these two sides play there seems to be some cause for fireworks and that’s no exception this weekend. This fixture down the years has certainly provided some real classics and unexpected results.

CaughtOffside taks a look at five brilliant Liverpool v Arsenal ties in anticipation of, hopefully, another classic on Sunday. 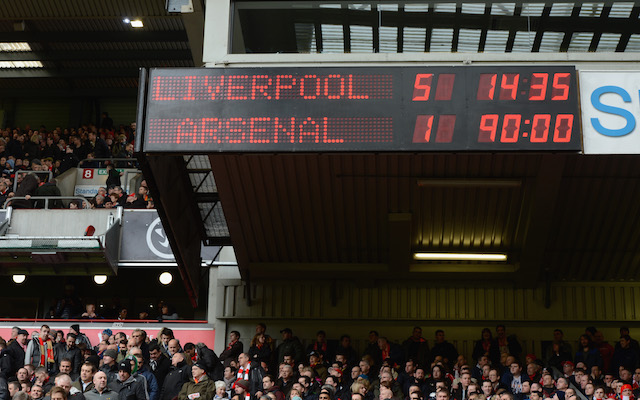 What better place to start than last season’s crushing victory from the Reds.

Arsenal arrived at Anfield as surprise Premier League leaders but their title credentials were torn to shreds, stamped on and laughed at in just 20 minutes as a Liverpool blitz saw them go 4-0 up. The hammering allowed Jose Mourinho’s Chelsea to usurp the Gunners at the top of the table, a position which the North Londoners could never recover.

However, Arsene Wenger’s men were able to get revenge on Brendan Rodgers’ side just a week later when the two sides met at the Emirates Stadium in an FA Cup tie which Arsenal won 2-1.