Man United boss Louis van Gaal will be handed a hefty transfer fee injection next summer with the level of funding dependent greatly on whether the Dutchman secures a top four finish and the resultant Champions League qualification.

In either case Van Gaal has instructed chief executive Ed Woodward to target Borussia Dortmund pair Mats Hummels and Marco Reus, with both players likely to leave the Westfalenstadion with Jurgen Klopp’s side sitting in the Bundesliga relegation zone after a shocking first half of their domestic campaign.

Van Gaal sees Hummels as the ideal player to boost his defence with the likes of Jonny Evans and Phil Jones failing to impress this term and the 25 year old World Cup winner may well feel the time is right for a fres challenge and may be tempted by the opportunity to lead the Old Trafford defence. 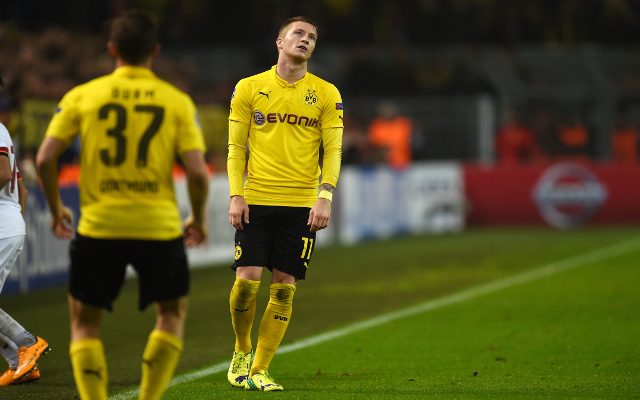 Marco Reus may prove a tougher nut to crack with Real Madrid apparently hot on the heels of the Borussia Dortmund attacker, who’s £19.6m release clause has attracted a host of prospective suitors.

Louis van Gaal is said to be unlikely to push for Radamel Falcao’s loan move to be converted into a permanent deal and Reus is a potential alternative attacking weapon.

The former Borussia Monchengladbach man traditionally plays in a withdrawn striking role but has the finishing ability to fill a central striking role and van Gaal feels that his price-tag is a good enough reason to make Man United’s interest known.

Bayern Munich may well retain an interest in either player but Borussia Dortmund will fight tooth and nail to prevent yet more of their talents moving to the Allianz Arena, with Mario Gotze and Robert Lewandowski making similar switches in recent seasons.

As such if Dortmund fails to hold on to the pair they may prefer to sell to a foreign outfit and have of course done business with Man United in the recent past, with Shinji Kagawa moving between the two clubs twice.