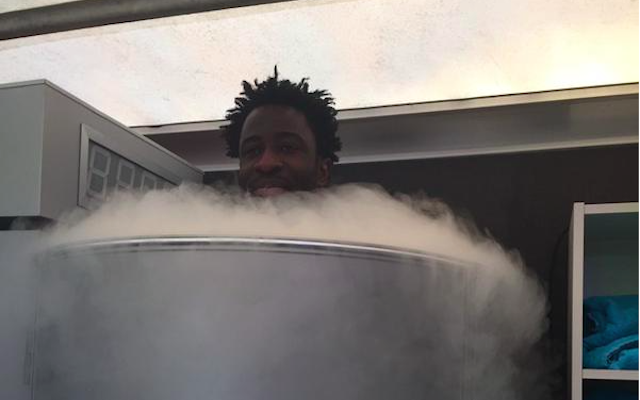 Swansea forward Wilfried Bony has been the most prolific Premier League striker this season, and we may have found the secret to his success.

Club physiotherapist Kate Rees snapped the Ivorian striker chilling out in the Welsh club’s gigantic cryochamber to aid physical recovery before their match with Liverpool on Monday.

The medical device can reach temperatures of up to -120C and is a modern take on the ice bath – a technique players use to speed up the recovery of muscles.

Bony recovering in the cryochamber for the next game @RehabRoomCryo @SwansOfficial pic.twitter.com/VUmQe6EUoL

Bony was taking such extreme measure to remain fresh due to hectic Premier League calendar during the festive period with Swansea playing 4 games over nine days.

Swans fans will be hoping Bony is in tip top shape for Monday night’s clash at Anfield; the Ivorian has scored eight goals in the League this season and four in his last seven.

But even if this doesn’t help Bony continue his good form, at least we’ll always have a picture of him inside, essentially, a giant cooking pot.