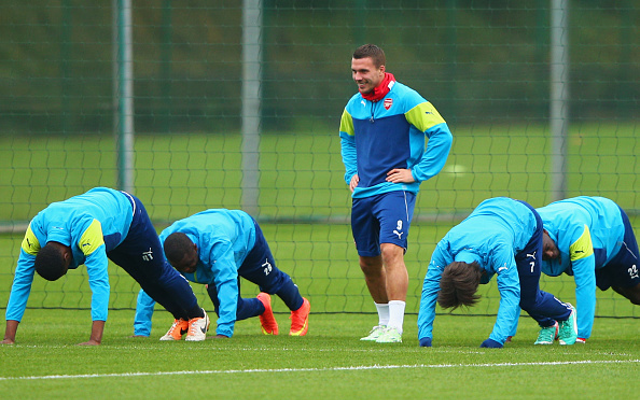 Lukas Podolski has angrily denied claims by the Daily Mirror that he stormed out of Arsenal training on Wednesday claiming the newspaper is lying.

The Mirror claimed in reports published overnight that the striker had angrily stormed out of Arsenal training because he was furious about his uncertain future and a potential loan move to Inter Milan collapsing.

The German international took to Twitter to quickly deny he had actually been in training and instead was receiving treatment for a groin problem.

The Arsenal man said: “Here ‘The Mirror’ have tried to make a story out of nothing. I find it incredible that newspapers are allowed to print pure lies to get people’s attention.

“In order to ‘storm’ off the pitch you have to actually be on the pitch in the first place, I spent the whole session inside with the medical staff. It seems it is ‘the Mirror’ who stormed too quickly to the keyboard.”

Podolski did not, however, give any indication as to what the current situation is surrounding his uncertain Arsenal future.

The German international was linked with a move to Inter Milan during the past week before Arsene Wenger quickly rebuked any suggestion of a loan move to Italy.

Whatever lies ahead for Podolski at Arsenal, it’s clear in the immediate future he will miss out on their trip to Southampton through injury.