Alexis Sanchez has been superb for Arsenal this season, and seems to think the club have already found the next Thierry Henry…

Arsene Wenger is renowned for bringing promising youth talent through the ranks at Arsenal, and has uncovered another gem according to £35m summer signing Alexis Sanchez.

The former FC Barcelona star seems to have formed an unlikely bond with 19-year-old striker Chupa Akpom, with the youngster clearly impressing his new Chilean teammate.

Akpom may not have been given many first team chances so far this season, but Sanchez certainly seems to think he has a bright future at the Emirates. The prolific forward has even compared the young Englishman to club legend Thierry Henry. 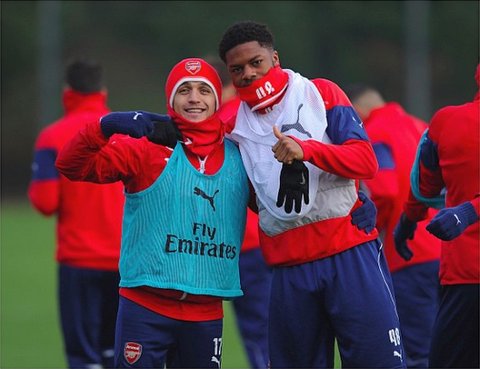 The pacey youth international took to Instagram to show his connection with the Gunners’ main man this season, revealing the pair in training ahead of their clash with Southampton.

Akpom may have some way to go before he reaches the level of the recently retired French superstar Henry, he clearly has the faith of Wenger and his fellow Gunners though.