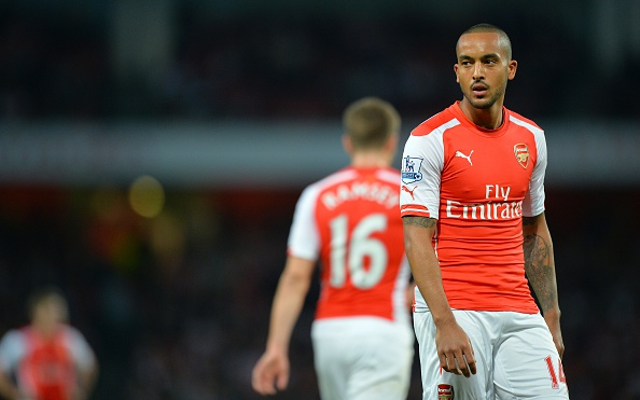 Theo Walcott has spent the majority of the last two seasons out injured, but on returning to full fitness has revealed that he wants to go down as an Arsenal legend, according to Goal.

The Gunners have endured a faltering start to their Premier League campaign, with erratic form leaving them sixth as we head into the new year.

Arsene Wenger has come in for some heavy criticism, with many calling for the manager to be sacked after nearly two decades at the club.

Walcott claims it is down to the players to turn their season around, and the pacey forward believes the current squad are more than capable of greatness.

“I am looking forward to getting a few minutes [on Sunday]. I’m not expecting too much from these games early on. It will be blowing the cobwebs away and will be good to be out playing with my mates again because I’ve missed it all,” he said.

“It’s important to have a good start, especially against Hull. We have our home support and we have to bounce back from the Southampton game.

“We want to become those legends [in Arsenal’s history] so we need to knuckle down and start performing.”

The 25-year-old was becoming more and more important to the North London club before his injury, with the Gunners lacking pace in the forward areas. With the likes of Alexis Sanchez, Danny Welbeck, and Alex Oxlade-Chamberlain available, that is not longer such a problem.

Walcott’s return will still be a huge boost however, and he is the kind of game changer who could certainly effect Arsenal’s fortunes heading into the second half of the season.