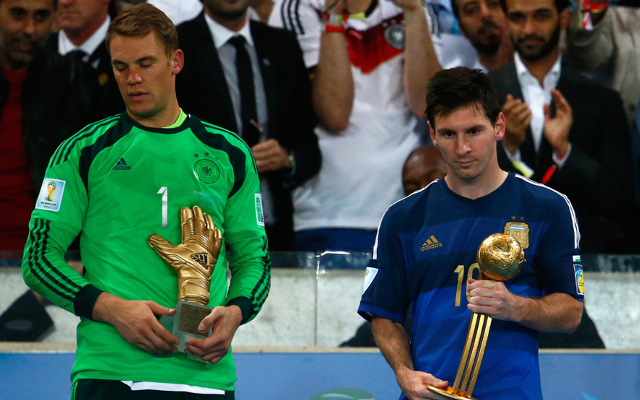 Footballing legend Diego Maradona has claimed that Manuel Neuer should win the Ballon d’Or ahead of both Lionel Messi and Cristiano Ronaldo, reports the Daily Mail.

The Argentinian icon has insisted that both his countryman and the Portuguese have not done enough to win the award. He thinks that they “took a break” during this campaign.

Ronaldo is the favourite for the award this year, after scoring 62 times and winning the Champions League during the calendar year. Meanwhile, his 27-year-old rival has been accused of being out of form despite grabbing only four goals less than the Real Madrid ace.

On the other hand Neuer has won both the Bundesliga with Bayern Munich and the World Cup with Germany. He was instrumental in both victories, and could realistically be the first player to break the stranglehold the other two finalists have had on the award for the past five years. He has also redefined what a goalkeeper can do, acting at times almost like a last defender at times for club and country.

“Neither Messi nor Ronaldo are my choice; my candidate is Neuer who did more to merit the award,” Maradona told television program De Zurda on a recent visit to Cuba.

“I think Ronaldo and Messi took a break,” he added.

This will give hope to the 28-year-old that he has a chance of winning the illustrious prize.