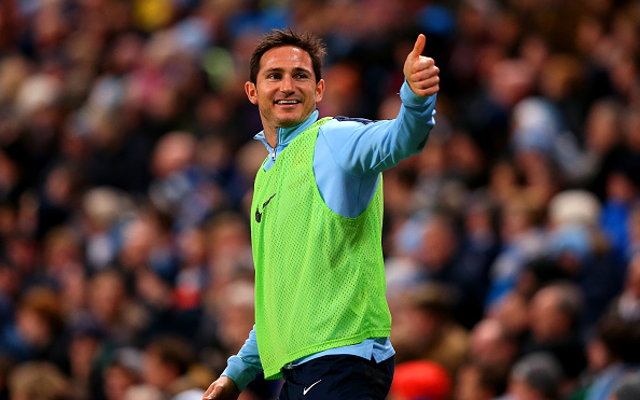 When a player never wanted to leave, is he really showing a lack of respect?

The furore over Frank Lampard’s deal to stay at Manchester City until the end of the season is rather amusing, actually. The outcome had an air of inevitability to it from the start, and he is now the subject of some heavy righteousness from MLS fans.

Lampard never wanted to leave Chelsea last season, but was big enough to accept their decision amid the heartache. He’s now turned his time in Manchester into somewhat of a soap opera by emerging as the standout performers in a team that cost over £200m to assemble.

Oh, and that goal against Chelsea certainly helped.

The 36-year-old had been expected to link up with new MLS outfit New York City FC at the end of the month in time to partake in the last of their pre-season campaign before the new season got underway.

However, he will now stay at City until the summer, by which time the MLS term will be half over.

Cries of disrespect and foul play have been heard from all corners, but the MLS in their indignation have failed to realise that Lampard actually signed his deal with Man City, and not with NYCFC. The New York club is the lovechild of City and the New York Yankees, and in this instance the parents have come first.

Franchising sports teams isn’t really the done thing in the UK – it’s not in our nature, unlike our cousins from across the pond who seemingly move teams or expand leagues whenever they please.

So how can a team with no fans, or stadium, even be that upset that a player that is miles out of their league wants to stay in a more competitive league for the same money for a little bit longer?

The standard of football in the MLS has improved drastically over the past ten years, and the attendances have risen with it, but it still cannot compete with European competitions. But this is more a problem with the perils of club ownership more than it is with Lampard’s attitude over playing somewhere else.

He will no doubt join the club eventually, and be a hit, even if he has to work a little harder to get the fans on his side, but it’s crazy to hold his decision to play in the Champions League and compete for another Premier League medal against him when he is clearly still good enough for both.