Midfielder hits back at ‘lies’ posted about MLS move.

Manchester City midfielder Frank Lampard has issued a statement regarding his proposed move to new MLS franchise New York City FC after it was confirmed that he would be staying with the Premier League champions for the remainder of the season.

Taking to his Facebook page, the 36-year-old denied that he had backed out on an agreement to join the MLS outfit in time for their pre-season campaign in the new year.

He insisted that the two parties have been in a constant dialogue over the deal and he will stay with the Premier League champions until the end of the season before flying out to link up with the new side.

There has been considerable anger directed at the former England man from football pundits in the United States, but Man City moved to confirm that they had not broken any rules regarding the extension of his loan.

However, Lampard also expressed his excitement at the thought of turning out for his new club laster in the year.

See the statement in full below. 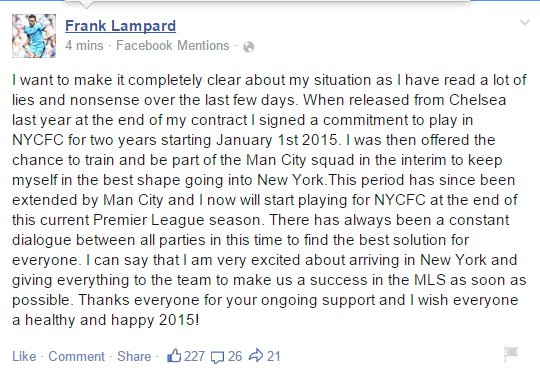