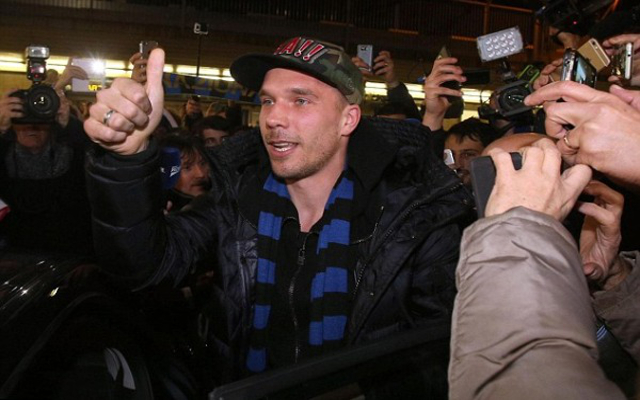 Arsenal forward Lukas Podolski has hit out at his former Emirates Stadium manager Arsene Wenger following the completion of his loan move to Serie A giants Inter Milan, report the Sun, with the German international left “angry” by Wenger’s failure to offer either a goodbye or a handshake following his San Siro move going through.

Podolski fell out of favour at the Emirates Stadium this season and had made just a handful of first team appearances for the Gunners in 2014/15, leading to him seeking a move elsewhere in search of increased first team opportunities, which are now likely to be handed to him by Roberto Mancini in Milan after he made his debut in the weekend draw with Juventus.

Former Cologne striker Podolski was a favourite amongst the Gunners faithful for his cheerful demeanor and ability to score spectacular goals, but it would appear that relations with Wenger were not quite so rosy if the German’s comments are anything to go by:

“He said nothing to me. He did not call me or say goodbye.”

“I don’t need flowers or a kiss from him.”

“But it is about respect, about saying goodbye. For me respect is important.”

The report draws a contrast between the apparent coldness of Wenger upon Podolski’s departure to Serie A with the player’s relationship with new manager Roberto Mancini, with the two reported to have been enjoying a good working relationship so far after his arrival at Inter.