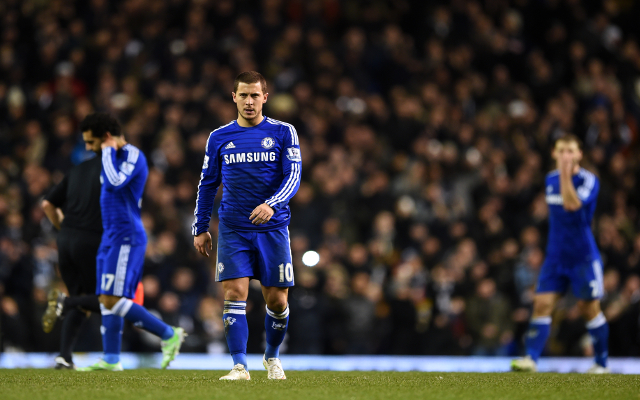 Blues believe that Eden Hazard, in particular, has not been receiving enough protection.

Chelsea have called for better protection from referees for their flair players, report the Express, with Belgian winger Eden Hazard, in particular, having been on the end of some rough treatment from opponents during the course of this season.

The issues has been exacerbated, in the eyes of the Stamford Bridge club at least, by the fact that Jose Mourinho’s side have had numerous contentious yellow cards awarded to them for simulation – with Cesc Fabregas’ incorrect booking in the draw at Southampton having particularly infuriated Mourinho.

Indeed, Mourinho has been charged with improper conduct by the FA this week for the comments he made after the 1-1 draw at St. Mary’s, leading to the Portuguese taking himself out of the media firing line and sending assistant Steve Holland to face the media ahead of the weekend’s matches.

It was former Crewe Alexandra coach Holland who addressed the issue of a lack of protection for the likes of Hazard, who has come in for some tough tackles from opponents this season who have struggled to tame the Belgian and his potent mixture of deadly acceleration and close control:

“Watching the replays five times to highlight how a player has spent more time in the air than he should’ve done is not a difficult job. But look at Hazard at Stoke. If he doesn’t see that tackle coming and get his studs up, that finishes his career.”