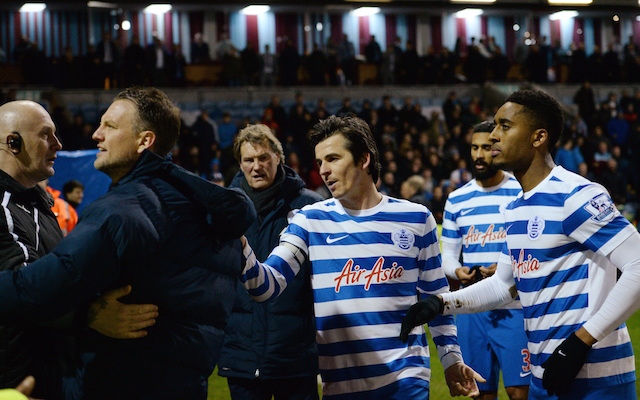 QPR players and fans had to be separated amid confrontational and angry scenes following the Hoops 2-1 defeat to Burnley.

The Daily Mail reports that Richard Dunne clashed with one of the club’s supporters as he walked from the field following a defeat for the West London club which confirmed the club had the worst away record in the top flight of English football for 50 years.

Dunne was led away from the field by goalkeeping coach Kevin Hitchcok whilst assistant boss Glenn Hoddle and midfielder Joey Barton had to step in to prevent Clint Hill continuing an angry confrontation with a group of 12 fans which continued until Hill had left the field.

The QPR boss Harry Redknapp played down the incident in his post-match comments, claiming it was only Richard Dunne involved.

“I think it was only Richard Dunne,” said Redknapp. “Someone said something to him. Kevin Hitchcock went over and took Dunney away.

“Dunney’s a great lad but someone got the hump. He didn’t go to have a row with anyone. He started applauding and someone … I don’t know what happened.”

Clint Hill meanwhile refused to be drawn on the issue simply saying: “I don’t want to get involved in all that. I don’t want to cause any more friction.”

The loss to relegation rivals Burnley confirmed QPR as having the worst record in the English top-flight since 1964-65 season and their tenth straight away defeat in a row.

‘Now you can’t do anything’ – Former Southampton star’s wild night out ended with an incredible ride home  Mar 12 2021, 10:14
Southampton FC