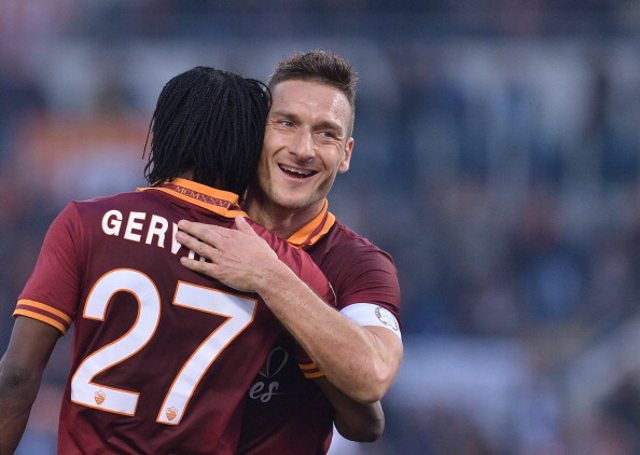 All the latest headlines from the newspapers in Italy as Roma captain Francesco Totti rescues his side while Juventus escape and take three-point lead at the top of the Serie A table.

– Totti snaps, Juve escape.
– Allegri’s men once again extend the gap to three points over the Giallorossi. Stunning show from the captain, a break for the record books as he saves Roma against Lazio (2-2).

– The Bianconeri are ruthless at Napoli (3-1), they’re already winter champions. But De Laurentiis is furious with the referees..

– Inter reach for everyone. The chase: first win at home for the new Coach. Genoa defeated (3-1),Mancini takes a ball to the face. Moratti: “Mancini makes the team play well.”

– Juventus on their way, Napoli are furious with the referee..

– The Bianconeri are three points clear and are winter champions. Pogba stunner, Britos equaliser than an offside goal from Caceres who sets De Laurentiis off. “Enough is enough, either bad faith or incompetence.”

– Francesco Totti: a goal and a selfie, what a derby!

– Great show of strength from the Bianconeri (already winter champions), who win in Naples after 14 years. Goal from Pogba, equaliser from Britos and then goals from Caceres and Vidal. De Laurentiis accuses the referee. Marotta and Buffon respond: “What are you talking about?”

– Toro: Maxi Lopez day. Deal reached for a swap with Larrondo. New assault on Ilicic who says no to Bologna.