Incredible prediction program shows the end of season table, with Arsenal and Manchester United finishing in the top four…

Arsenal finishing in the top four has become something of a given over the last few years, with Arsene Wenger guiding his side to Champions League football for 16 consecutive seasons.

Every year someone threatens to knock the Gunners off their perch, but whether it be Everton, Liverpool, or North London rivals Tottenham, Arsenal always manage to come out on top.

Even when things have looked bleak, and it just doesn’t look like things are going Wenger’s way, they somehow manage to scrape into fourth spot.

Things are tight once again this year in the race for that highly coveted fourth place trophy, but according to Bloomberg Sports Arsenal are a certainty for top four once again.

Chelsea and Manchester City look pretty immovable at the top of the table, with the cash rich pair likely to be occupying first and second place come the end of the season. Arsenal and Manchester United will be the ones to make up the numbers in the Champions league however, despite Southampton enjoying a fantastic season under new boss Ronald Koeman. 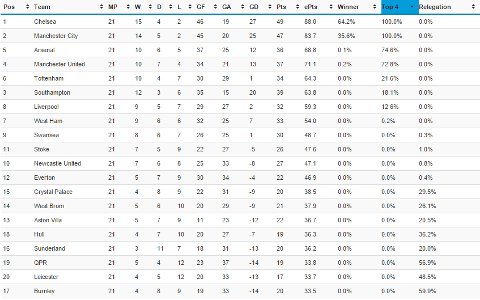