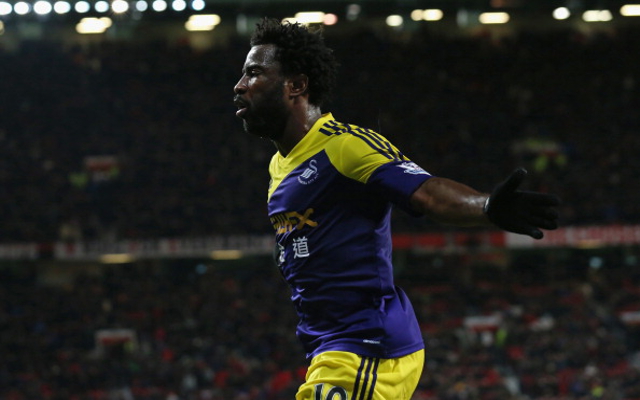 Swansea City paid striker Wilfried Bony a cool lump fee of £1 million to sign a new contract that saw his £19 million release clause at the Liberty Stadium removed, report the Sun, but the Ivorian international is still moving ever closer to a move to Manchester City after the two clubs reportedly agreed an initial fee of £25m.

Bony is still yet to agree a wage packet with the Etihad Stadium club, with the striker concerned about a potential lack of game time and looking for a £200,000 per week basic wage to compensate, but a move to the Premier League title holders this January still looks like an inevitability this January.

When Swansea initially signed the powerful forward from Dutch Eredivisie outfit Vitesse Arnhem, a release clause of £19m was inserted into Bony’s contract, but that particular clause was removed when Bony signed a new contract in the summer after the player was paid £1m by his club.

That move now looks like a masterstroke by Swansea, who are now set to net an initial £25m for the sale of their prized asset, according to the report, with an extra £3m also written into various performance related add-ons.