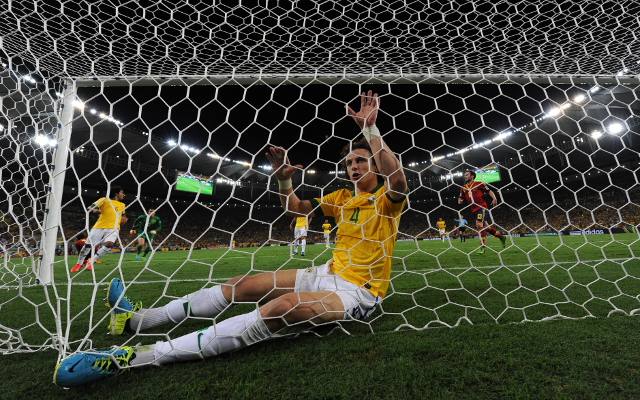 David Luiz, the Brazilian who couldn’t get into Chelsea’s side last season, and who embarrassed himself at the World Cup, and who now plays for struggling PSG, has been elected into the FIFPRO World XI…

What are they smoking in Zürich? A cruel, cruel joke on David Luiz, that….

David Luiz is in the team of the year. That joke writes itself. #BallonDOr2014 — William Hill Betting (@WillHillBet) January 12, 2015

David Luiz in world XI? And they say Fifa is a laughing stock…

David Luiz is in the FIFA TOTY! Yes, the David Luiz who conceded 7 vs Germany and was benched at club level for much of the season. — Messi Minutes (@MessiMinutes) January 12, 2015

Let’s play a game. It’s called, name as many defenders as possible that deserve the spot in TOTY over David Luiz?

David Luiz in the FIFA World 11 back four! That’s like Iniesta getting into the mid… Oh, wait. — Colin Murray (@ColinMurray) January 12, 2015

Did David Luiz actually get TOTY or is that Fifpro banter

After naming David Luiz in team of the year, the FIFPro website has crashed ..