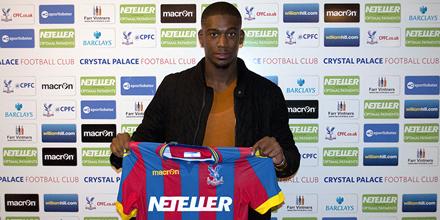 Eagles bring in striker on loan till the end of the season.

Crystal Palace have confirmed the signing of Arsenal youngster Yaya Sanogo on loan for the remainder of the season, according to the BBC.

The 21-year-old has become new manager Alan Pardew’s first signing since leaving Newcastle to take the reigns of the club last week.

Sanogo was linked with a move to his native France to join Bordeaux but Gunners boss Arsene Wenger wanted to loan him out to an English club.

“He is somebody that I have tracked personally and this club has too so that fitted well.”

Sanogo linked up with the Gunners last year from French side Auxerre, but has been used sparingly by Wenger since then.

He has made just three Premier League appearances this term, but scored his first and only goal for the club in their 2-0 win over Borussia Dortmund in the Champions League.

The France under-21 international has been tipped to be a future star of the club, but has been kept out of the side despite a series of injuries to the likes of Olivier Giroud and Danny Welback.