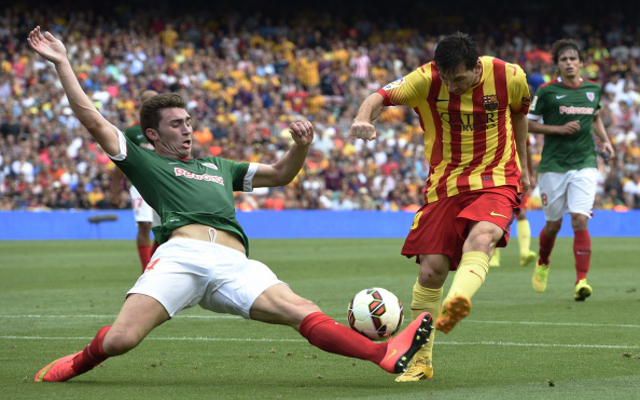 A defender could finally be arriving at Old Trafford…

Athletic Bilbao star Aymeric Laporte is apparently packing his bags with only the fine details to be sorted out in his transfer to Manchester United, according to reports in Spain.

The final fee is yet to be decided between the two clubs and the Red Devils may have to pay the whole of his release clause, which supposedly totals €42 million. The Mancunian club have only offered £25 million (€32 million) so far, but a deal is still expected to be announced soon enough. The Frenchman is one of the most promising centre-backs in Europe, and so would be a very welcome addition at the North West side.

Old Trafford boss Louis van Gaal will want the 20-year-old to help shore up his shaky defence. The back line at the Mancunian club has come in for criticism in recent weeks as some of the players seem uncomfortable as part of the Dutchman’s favoured back three formation. The side’s 1-0 loss to Southampton on Sunday has not helped ease the unhappiness, and the team’s detractors have only grown louder.