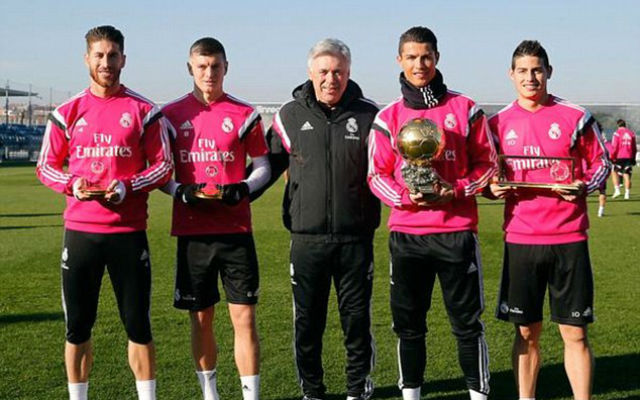 Ronaldo and palls show off trophy back on the training ground.

Cristiano Ronaldo return to training with Real Madrid on Wednesday after picking up his second Ballon d’Or award in two years.

And what better way to celebrate his achievement by passing around the trophy as if it were a game of pass the parcel.

The Portuguese superstar showed off the shiny golden award to coach Carlo Ancelotti and his team-mates after seeing off competition from Lionel Messi and Manuel Neuer to win the world’s best player crown for a third time.

He was joined by teammates James Rodriguez, Toni Kroos and Sergio Ramos at the event as the latter two were included in the Team of the Year, whilst Rodriguez picked up the Puskas award for his goal against Uruguay at the World Cup.

VIDEO- This is how the squad congratulates Ronaldo on his third #BallondOr win http://t.co/Mv9TslkfFC #HalaMadrid pic.twitter.com/AFVrzpmgwF