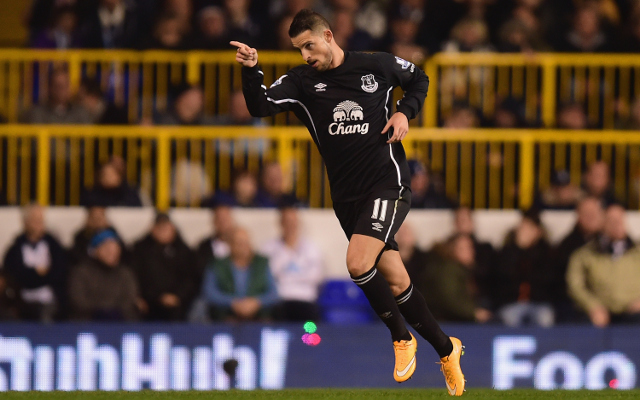 Kevin Mirallas will not enter discussions with the Toffees until the summer.

The Goodison Park future of Everton winger Kevin Mirallas could be in doubt, with the Mirror reporting that numerous top clubs from across Europe have been alerted to the possible availability of the Belgian international after he took the decision to delay talks over a new contract with the club until the end of the season.

Mirallas has grown into one of the most important players for Everton since he was signed from Olympiakos by former manager David Moyes, with the winger arguably having taken on an even more prominent role in the Toffees side since the arrival of Roberto Martinez as manager.

The report suggests that Mirallas is still open about his future, with the Belgian currently having 18 months remaining on his current Goodison Park deal and, whilst the club are understandably keen to keep him, Mirallas won’t be entering into talks until he returns from his summer holidays in July.

Mirallas did move to alleviate the concerns of Everton fans, however, suggesting that he was still motivated to be a success on Merseyside and simply wanted to keep focus:

“I’ve spoken very well with the manager and the chairman, and there is no problem.”

“The best thing, for me and for the team, is that I finish the season well. Then after that I will go away on holiday, and when I come back we will talk about my situation.”

“But like I say, the most important thing in the meantime is to play well for the team.”