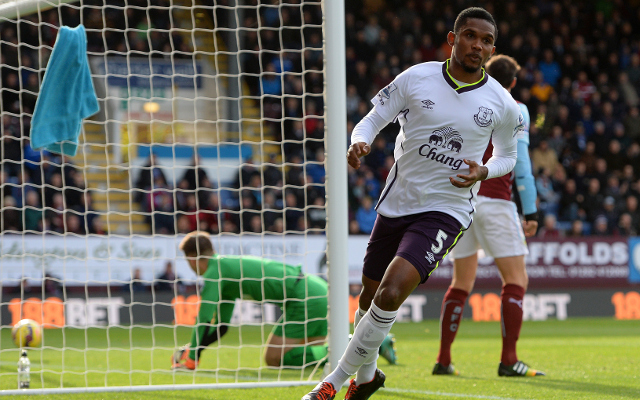 Serie A giants Sampdoria have been told to increase their offer if they wish to sign Everton striker Samuel Eto’o.

The Italian club have already discussed a deal with the Toffees to try and sign the Cameroon forward – who will be allowed to leave Goodison Park on a free transfer.

However, they would have to match his current £60,000 a week deal and Eto’o has also requested an 18 month contract to seal his return to Italy.

The 33-year-old only signed for Roberto Martinez’s side in the summer following a one season spell at Chelsea where he occasionally impressed, but desires regular first team football and the Italian club insist they can offer more regular first team action.

Eto’o is happy at the Merseyside club but his lack of a starting role, and the fact he is 33, has meant he’s looking for a more permanent role in the side.

Following his release from Stamford Bridge at the end of last season, the former Barcelona striker was chased by a number of Middle Eastern clubs as well as AC Milan and AS Roma, with Everton’s local rivals Liverpool having also sounded him out over a potential deal.

“A couple of clubs contacted us in the last 12 hours,” Everton boss Roberto Martinez said, according to the Daily Mirror.

“We will see what is best for him and us over the next few days.”

Eto’o has played a decent amount of games, 20 in total, and has four goals and two assists so far this campaign, however it seems his lack of a permanent starting berth could lead to an imminent exit.