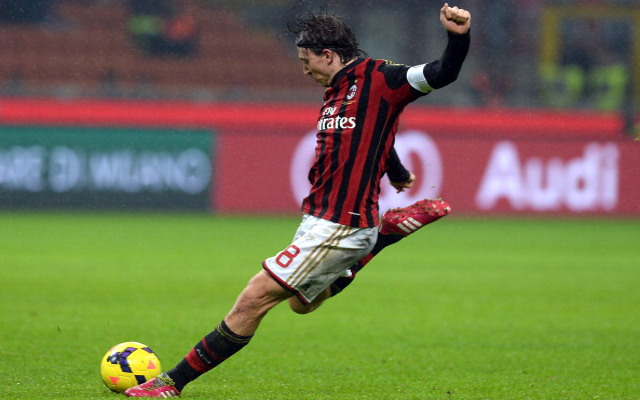 All the latest headlines from the newspapers in Italy as AC Milan captain Riccardo Montolivo issues a rallying cry to the rest of the squad to get third place.

– The captain believes in third place and snarls: “It’s time to get our claws out. Inter don’t scare us, we’ll finish ahead of them. Inzaghi uses a stick.”

– Juve 2 are overwhelming. Giovinco, night as a king. Coppa Italia: Bianconeri advance to the quarters to face Parma.
– Allegri’s team, with a lot of reserves beat Verona 6-1. The striker scores two goals and provides an assist. Coman wonderstrike.

– Mancio’s idea, Inter will return to the fantastic four in attack. Under Mou there was Milito, Eto’o, Pandev and Sneijder. Now there will be Podolski, Shaqiri, Kovacic and Icardi. Transfer market: Destro for June?

– Gonzalo Higuain’s future: “I’ll stay here if Napoli finish third”. His brother, agent: “Gonzalo is happy, but the club must make the Champions League. I believe in them.”

– A unanimous cry: offside remains a puzzle, it’s not working, let’s change it.

– How beautiful Juve 2 are.

– Coppa Italia: Performance from the reserves, and a great 6-1 against Verona. Brace from a super Giovinco, magic from Pereyra and Coman. On the attack for former player Osvaldo.

– Lazio in shock, Felipe Anderson out for a month.

– Serie A in agreement about technology right away.

– Only Cesena are against the change for goalline technology. The clubs are split on video replays.

– Festival of football at a sold-out stadium: double from Giovinco, goals from Pereyra, Pogba, Morata and Coman.
The Bianconeri (who have the Veronese again on Sunday) will take on Parma in the quarter finals.

– Real, banned from the transfer market? Messi: City are here.

– Ventura’s errors and Cairo’s faults. We delve into the crisis at Toro, waiting for signings.

– Ferrero is sure: “Muriel will play for Sampdoria”.