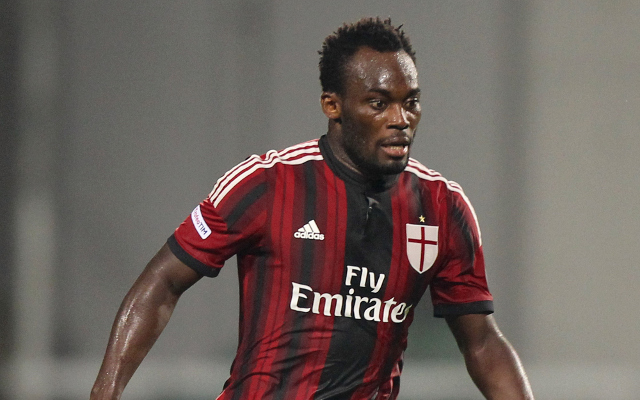 The AC Milan midfielder and former Chelsea star is set to leave Serie A in the summer and Arsenal could benefit more than any other club by acquiring his signature, reports the Express.

Essien’s agent Fabrizio Ferrari has revealed that the Ghanian’s current deal with Milan isn’t likely to be extended, meaning he will be a free agent come the end of the season.

The 32 year old’s best days are behind him, but the former Blues general could still prove to be a valuable addition to a top-flight club, and seems the perfect fit for the faltering Gunners.

Their midfield hosts a plethora of attacking talent, with Santi Cazorla, Mesut Ozil and Aaron Ramsey – yet these attack-minded players offer little protection to their back-four.

Arsene Wenger must look to strengthen this area if they are to improve; it’s this lack of protection and dominance in midfield that has seen his side struggle to break into the top four.

Chelsea are flying high in the league with Nemanja Matic adding immense security to the Blues side and similarly the powerful Yaya Toure remaining pivotal to Manchester City.

Arsenal’s Mikel Arteta and Mathieu Flamini, while unquestionable hard-workers, do not offer the same much-needed intimidating level of physicality.

Essien, as an experienced and athletic player, could therefore be an excellent temporary solution to the problem-area while they continue to search for a permanent signing.