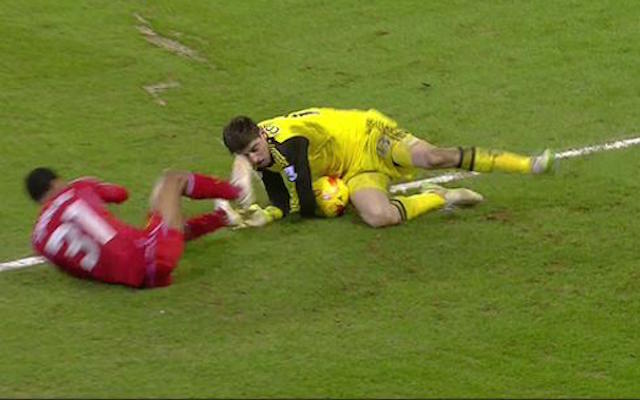 We look at the referee’s performance during the League Cup semi-final, did he get the big decisions right?

Following on from Liverpool and Chelsea’s 1-1 draw in the League Cup, there were three key refereeing decisions that Martin Atkinson had to make. Did he get them right, though…?

There was definitely a coming together between the two players but on evidence of the replay Atkinson gets the decision right. Can misses the ball completely and, although the contact is light, he impedes the run of Hazard in the box.

It’s difficult to see what more Costa could have done to get out of the way when laying prone on the pitch. The striker was attempting to play the ball with his feet before it gets hit against him at pace when the ball is flicked up into the air. Would have been a very harsh decision.

Courtois Outside His Area

Although it appears unintentional, the Belgian’s momentum takes him outside of the box when still grasping the ball between his legs and arm.
It was a hard decision for Atkinson to see with Courtois shielding the ball but it should have resulted in a yellow card for the keeper and a dangerous free kick late in the game.