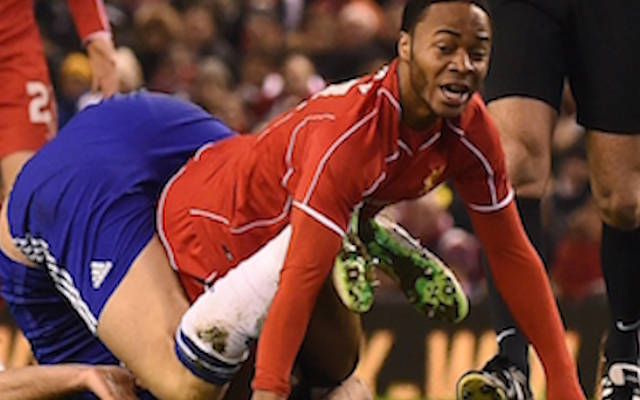 Chelsea and Liverpool may have had a incredible battle on the field last night in the Capital One Cup semi-final but it gave Raheem Sterling and John Terry the opportunity to get to know each other a little better.

The two England stars looked like they were auditioning for the WWE after they became entangled following a collision on the pitch.

Fair play to Terry trying to through the Walls of Jericho on Sterling #liverpoolVChelsea #WWE pic.twitter.com/akTCENkrv7

Sterling’s forward run was blocked by the former England skipper and the force of Reds winger caused him and Terry to roll over on top of each other.

Terry landed on his shoulders with his head stuck squarely between Sterling’s legs and the Chelsea defender’s limbs flailed and wrapped around the Liverpool star.

Decent when Raheem Sterling got John Terry in The Walls Of Jericho. pic.twitter.com/lK24oHvpYP

It was a quite hilarious and entertaining incident in a match which hardly needed it with the two sides putting on an incredible display in their 1-1 draw.

Sterling himself starred, scoring the equaliser with a lung bursting run forward in the second half to outpace the Chelsea defence. Eden Hazard had earlier put the Blues ahead via the penalty spot.

The match ended in a draw and the two sides will meet in the second leg at Stamford Bridge next week.