It has been revealed that Liverpool sell more shirts in Bristol, Dublin and London than they do in their home city, reports the Daily Mail.

The Reds only have 6.4% of their British sales on Merseyside, lending credence to the famous quote from David Moyes that Everton is the club of the people in the city.

Not only this, but they actually sell 4.87% of their jerseys in Manchester, home of their fierce rivals Manchester United. This isn’t that far behind behind their home town!

It also looks like there are a lot of Cockney Scousers… 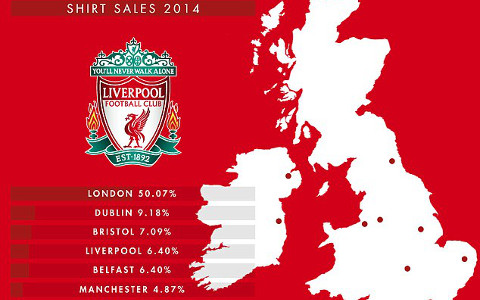