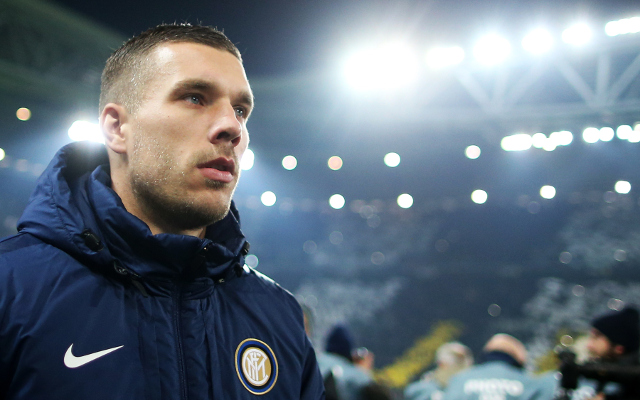 Fan-favourite Podolski has revealed why he disliked Arsenal…

Lukas Podolski moved from Arsenal to Inter Milan on loan earlier this month until the end of the season, and has since confessed what was difficult about his time with the Gunners that encouraged a move away from the club.

The German international spent much of his time in North London warming the bench, even with an excellent goalscoring record for the club – with 31 goals in two-and-a-half for the Premier League outfit.

Podolski has admitted that his time at Arsenal was far from what he had hoped for with the forward saying that he was on the bench too often:

“It’s not a problem for me, being on the bench, but at Arsenal it happened too often,” the 29 year old was quoted by the Daily Star.

“I scored two goals in the Champions League, then I was left out. I ddidn’tlike it. Fortunately the call came from Mancini.

Nevertheless, the German World Cup winner is yet to consider a permanent move to Serie A with the attacker expressing his affection for the Premier League:

“Will I stay beyond my loan? It’s not something that concerns me, I just want to play. I don’t like making proclamations, for now I’m very happy,” Podolski said.

“The Premier League remains my favourite League because dynamism and teams fight until the end.”