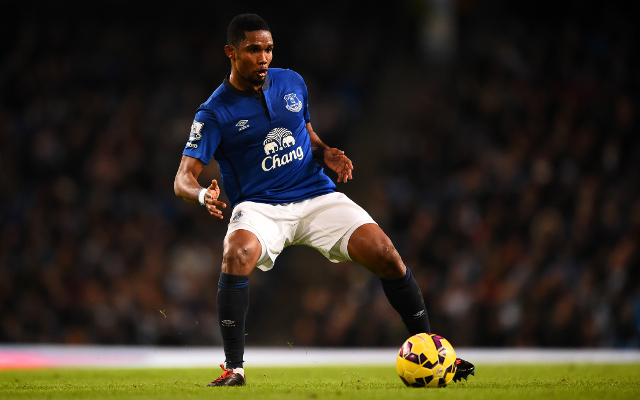 The experienced frontman returns to Serie A after a frustrating spell at Goodison Park.

Serie A side Sampdoria have this evening confirmed the signing of experienced Everton striker Samuel Eto’o following days of speculation that the Cameroonian would be heading back to Serie A, with the Italian outfit announcing the deal on their Twitter account during the course of Saturday evening.

Eto’o has endured a frustrating spell with the Toffees since he signed on a free transfer from Chelsea in the summer, scoring just three Premier League goals for Roberto Martinez’s men so far, and he will now be looking to refind the form that he had in Italian football at Inter Milan, with whom he won both Serie A and the Champions League under Jose Mourinho.

The move spells the end of Eto’o’s brief career swansong in the Premier League, where he impressed in patches under Mourinho again at Chelsea last season, although the two appeared to have a fractious relationship with Mourinho making jibes about the player’s age in a recording caught on a secret tape.

Sampdoria are currently looking to maintain their impressive form of the first half fo the season and defy the odds by securing a place in next season’s Champions League with a third place finish.