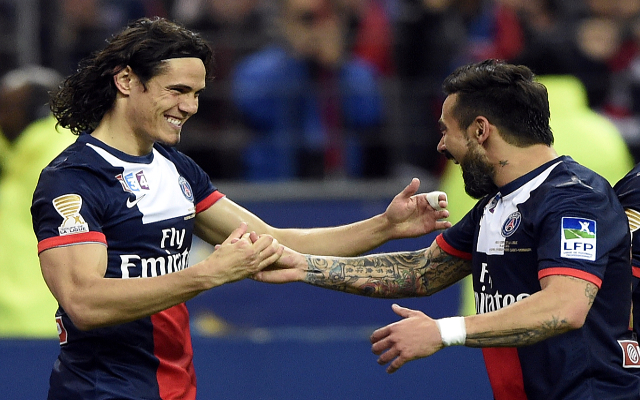 Liverpool are preparing the groundwork for a double PSG raid with the club’s owners keen on securing the services of attacking pair Edinson Cavani and Ezequiel Lavezzi.

The Anfield side have suffered greatly following the sale of Luis Suarez to Barcelona and are keen to make a statement of intent in the summer transfer window and will push to bring in the South American duo though will only make the move if they have a Champions League berth.

Brendan Rodgers has earmarked moves to strengthen his attack and the apparent availability of the Parc des Princes stars have led to a firm interest in two players who can certainly go some way to helping to fill the void left by Suarez’s departure.

Neither Rickie Lambert nor Mario Balotelli have impressed since their summer moves to Merseyside and this has, in part, led to Rodgers push to convert Raheem Sterling into a striking weapon.

Liverpool bagged over 100 Premier League goals last term but the loss of Suarez and ongoing injury concerns over Daniel Sturridge have seen Rodgers side fail to make anywhere near the same level of impact in the final third.

The club’s American owners are ready to back Rodgers in the transfer market providing the Northern Irishman retains a place in the Champions League, with the carrot of participation in Europe’s premier club tournament likely to be needed in order to persuade either Cavani or Lavezzi to move to Liverpool in any case.

Liverpool may elect to use former striker Suarez to aid a push to sign fellow Uruguayan Cavani, who has grown disillusioned at PSG, and the powerful forward may be ideally suited to make a big impact in the Premier League.

The big marksman has been a moderate success since moving to the French capital but is unhappy with Laurent Blanc’s insistence at using the former Napoli man as a wide attacking option.

Cavani scored 104 goals in three seasons in Naples and his record of 40 goals in 71 PSG appearances is a very healthy one given the role he is used in.

Lavezzi can be used in a wide or central role and is an experienced campaigner who is said to be available for as little as £8m.

Any move to sign Cavani however will require Liverpool to break their transfer record with PSG likely to demand a fee close to the £52m they paid for the player back in July 2013.

The pair were both fined and suspended for failing to attend PSG’s winter training camp in Morocco earlier this month.