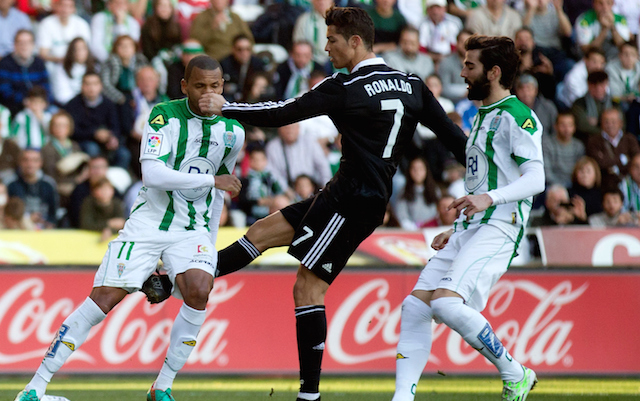 Ronaldo was dismissed late in the game after kicking out at a Cordoba player.

Eidmar, the player who Cristiano Ronaldo kicked out at late in Real Madrid’s 2-1 win over Cordoba, has strangely said he does not wish the three time Balon d’Or winner to be suspended for three games.

Ronaldo saw red after a petulant kick and punch as his frustrations got the best of him during a difficult afternoon for the winger who was overshadowed for most of the match by another former Manchester United man; Bebe.

But perhaps more shockingly than that, Eidmar has now said he does not wish Ronaldo to face any action from the Spanish League authorities.

“I forgive Cristiano Ronaldo. I hold no grudge,” he said, reports Goal.com.

“It was not an attempt at aggression. He hit my legs and my mouth, nothing more. What I mean is that those responsible understand that things happen on a football pitch.

“He should receive a normal suspension, nothing more. I don’t want to hurt him and I hope that he remains the best player in the world.”

It looked like Ronaldo’s petulance could cost Real who struggled to break down their opponents but a late Gareth Bale penalty bailed out Ronaldo for his moment of madness.

And the Portuguese took to Twitter after the match to apologise for the incident:”I apologise to everyone and especially to Edimar for my thoughtless act in today’s game.”