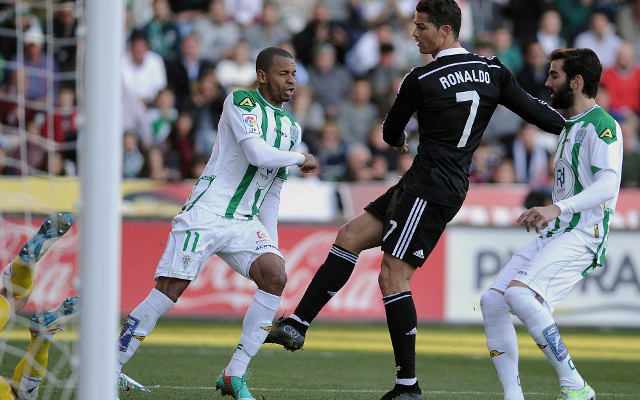 The Real Madrid man might be getting away with it…

Real Madrid ace Cristiano Ronaldo may not be facing a long ban from La Liga, despite kicking and punching two Cordoba players on Saturday, according to the Metro.

The Portuguese was sent off for kicking a player during Los Blancos’ 2-1 victory over Cordoba. However, the referee has made no mention of violent conduct in his match report, meaning that the Ballon d’Or winner could end up with a ban of only one or two matches.

In his report it apparently says, “In the 83rd minute Cristiano Ronaldo was sent off for the following reason: kicking an opponent when the ball was out of reach.” There is no mention of the 29-year-old’s initial punch of a player.

If he does only receive a light punishment then he could be allowed to line up against Atletico Madrid in three matches time.

How can the world’s best player get away with this?