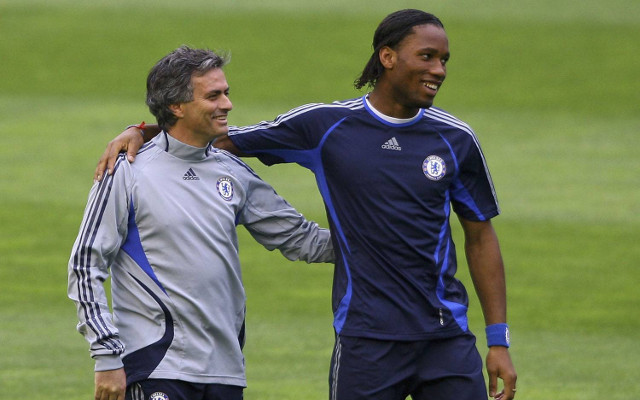 Chelsea boss Jose Mourinho has claimed Didier Drogba is the club’s “best ever value-signing” and has revealed that the “big man” cried like a baby when he left in 2007, reports ESPN.

The Portuguese has revealed that there are three key moments that have characterised Drogba as not only a phenomenal striker, but also a great man:

“The first one was when I met him at Farnborough Airport when he was landing to sign for Chelsea. The way he hugged me and the way he thanked me was not normal for a player towards a manager, immediately after signing for a new club. Chelsea were changing his life forever in that moment, and he knew that,” Mourinho was quoted by ESPN as saying.

“The second moment was after we won the 2007 FA Cup at Wembley against Manchester United. The game finished and I went to the dressing room, leaving the players to enjoy the moment and to celebrate on the pitch. I was on the phone with my wife, when suddenly a big monster ran into the dressing room and told me that if I didn’t come with the players, they wouldn’t collect the cup. They would only go up there with me,” he continued.

“The third moment was when I left Chelsea in 2007 and I saw the big man crying like a baby. So I can say that he is a phenomenal person,” said the Blues boss of the legendary striker.

What’s more, with reports that Drogba wants to extend his stay at Stamford Bridge beyond this season, Mourinho has backed the striker, claiming that the Ivorian “is not finished yet.”

The Chelsea faithful will more than welcome the Ivorian remaining with the club, whether it be as a player or as a part of the coaching staff.

Drogba was rewarded yesterday for his contribution to football by the Football Writers’ Association at the FWA’s Gala Tribute Evening in London.