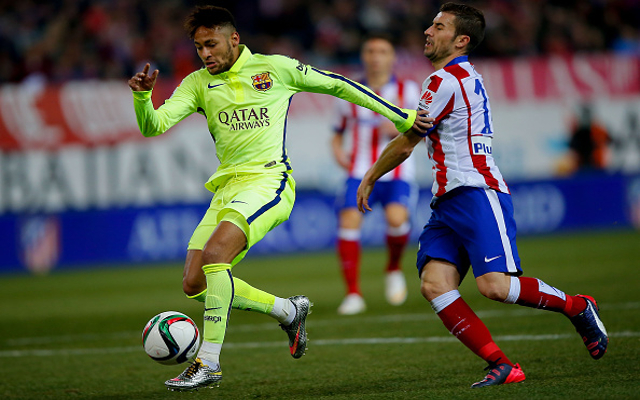 Catalan side edge past Atletico at the Vicente Calderon.

Fernando Torres netted after just 38 seconds to level the tie on aggregate.

But with less than ten minutes on the clock Neymar had leveled matters.

Raul Garcia powered home a spot-kick to put the Vicente Calderon side 2-1 ahead on the night.

However a messy Miranda own goal made it 2-2 before Neymar bagged his second after a good ball in from Lionel Messi.

Gabi was sent off at half-time and Atletico Madrid were down to nine late on when Mario Suarez received his second caution.

In other incidents of note Juanfran mocked Neymar with a cheeky 7-1 hand gesture in relation to Brazil’s thumping at the hands of Germany at last summer’s World Cup finals.

Whilst Arda Turan was lucky to not be punished for appearing to throw a bottle towards the linesman or a member of Barcelona’s coaching staff.