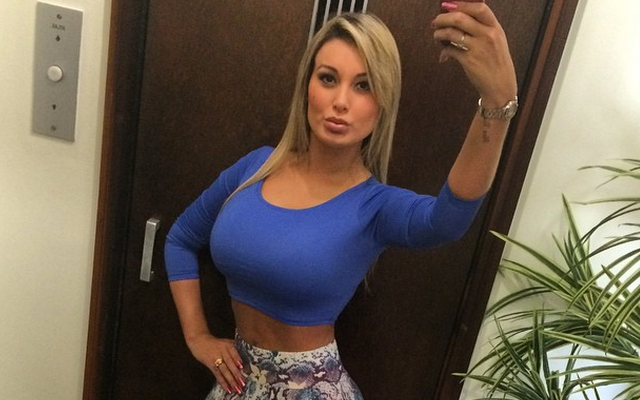 Brazilian glamour model Andressa Urach, who once claimed to have slept with Cristiano Ronaldo while he was with former girlfriend Irina Shayk, has revealed that she nearly lost her leg because of plastic surgery.

The 2012 Miss Bum Bum runner-up was nicknamed “Beanpole” because of her lack of curves, until she went under the knife to drastically change her appearance.

She’s had silicone implants, anabolic steroids and a nose job, as well as gel and botox injections.

However, her love for plastic surgery is no more. Now, she is a spokesperson warning of the dangers of cosmetic procedures.

Urach went into septic shock in November, when she had to be placed on life support after being given 200 times the dose of Hydrogel that the government allows.

Her leg began to rot and there were real fears that it may have had to be amputated.

After being released from hospital, having spent a month in intensive care, a relieved Urach said: “I put that poison in my body, mostly because of having too much vanity.”

She has gone on to do many more interviews about her experiences, including one on TV.

During her television interview, her leg was seen bleeding through her skirt.